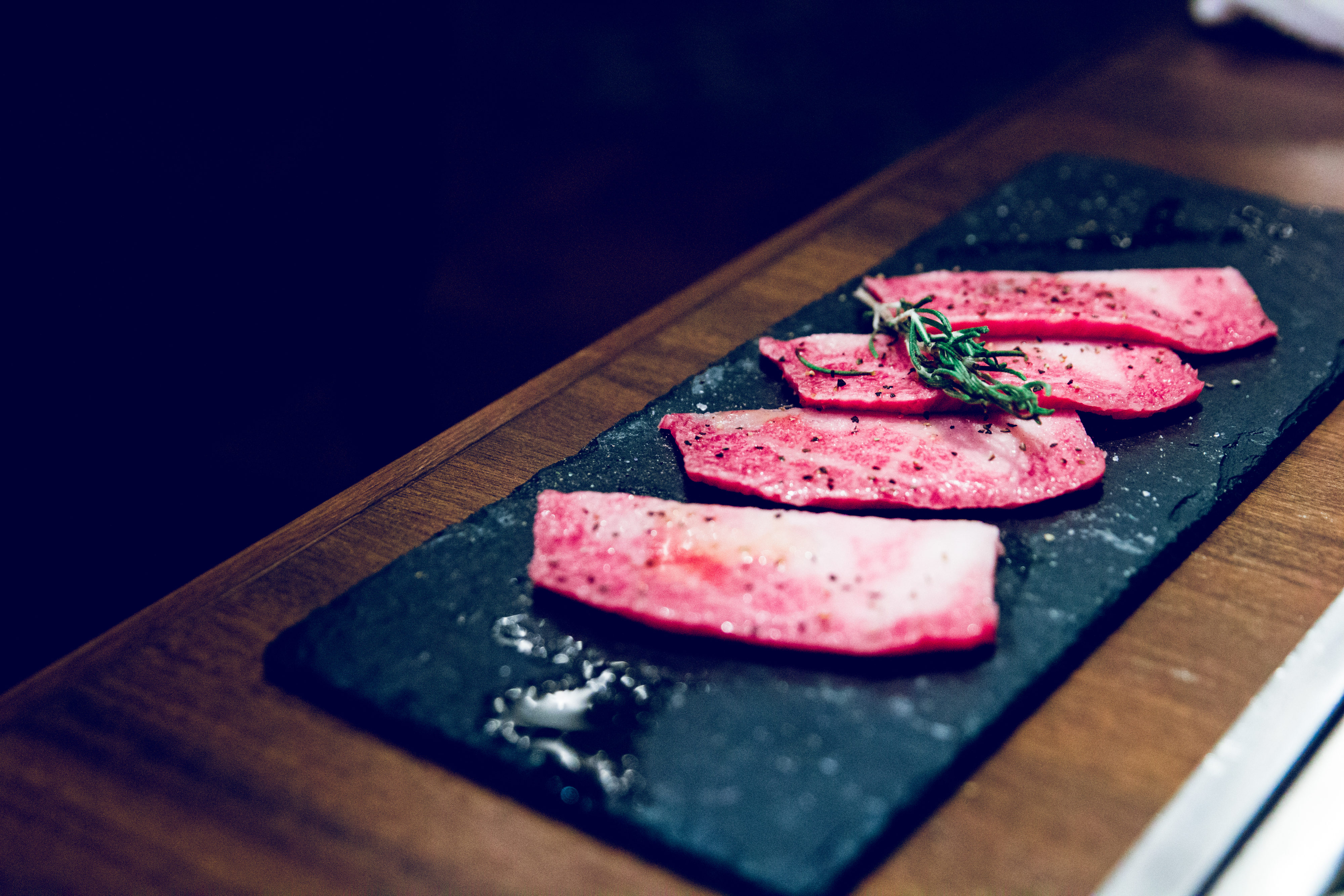 Let me explain. YES, sushi is widespread in Japan, and good-for-its-value sushi or onigiri is found quite easily (snack heaven at their 7-elevens!) But the range of food in Japan offered is extensive and delicious (e.g. izakaya, kaiseki, yakiniku to name a few.)

Style. Many of the sit down restaurants in Japan are really sit-down-eat-and-go. Lines, or “queues,” are common, food shops can seat as little as 6-15 people, and turnover is QUICK! Seating is frequently bar style, with some restaurants (like Ichiran below) having tiny cubicles per person. Although this spot was a chain, it was one of the most delicious ramen spots in my opinion. How flavorful do like the broth? How spicy? What ingredients? Extra noodles? Order it however you want with how MUCH you want via vending machine, then eat it in the comfort of your own privacy. (Yes, at the end of your meal you even get a paper asking if you want more.)

Katsu. You know that katsu (deep-fried breaded goodness) you order at your local Japanese food chain? The katsu there is so light and crispy yet melts in your mouth. At Tonkatsu Maisen (below), we were able to make our own sauce. Can’t get this anywhere else.

Green Tea. Calling green tea enthusiasts: it’s everywhere. But! Not as “everywhere” as you would think. In Japan, green tea isn’t just slapped on as a dessert option. You can usually find them in specialty stores dedicated to unearthing the richly raw yet subtly sweet flavor.

Chain Restaurants. Fast food is fast, but packed with quality. Don’t hesitate to try out some of the chain restaurants in Japan. I found during my trip that they are widespread for a reason! Pictured below is probably the best tempura I’ve ever had in my life combined with soba noodles (tried for the first time!) at Tendon Tenya in Akihabara.

Beer in Japan. Beer is pretty much a staple at most restaurants. When we sat down at our very first izakaya shop, the first thing the server asked was, “Beer or sake?” Drinking at 9AM? Normal. Beer in vending machines? Normal. Beer for $3 a can? Normal. Another tip: Pour your company his or her drink and never your own. Kanpai! (Cheers! Or more suitably, bottoms up!)

Coffee in Japan. I’m sorry to say this, but good coffee in Japan is almost sparse. It’s not uncommon to pay 600 yen (~a little under six dollars) for 6oz of coffee. Also, I noticed most of the brews were light roasts compared to here in the states. However, after a diligent search and almost giving up, I found this little gem hidden upstairs in a Kyoto alley. Elephant Coffee Factory shows coffee as the true art that it is. Each cup is made as its ordered by the owner himself, complemented with a few chocolate covered raisins for ultimate tastebud euphoria.

Tea in Japan. On the contrary, tea in Japan is a different story. Green tea is almost always included (for free!) with your meal, at your hotel, etc.

Aoyama Farmers Market. We found this place on accident while walking around in Shibuya, but here you can find some of the most interesting gifts.

Kaiseki. Kaiseki (multi-course) is something everyone should try when visiting this culinary-dense country. It’s a traditional multi-course styled meal where each course (usually consisting of small plates) is hand-crafted in tasteful and visual harmony. Our dinner at Yunoshimakan (ryokan/onsen in Gero) included shabu shabu, sashimi, Hida beef sirloin, and locally grown produce.

Room service. I don’t know if this goes for every hotel in Japan, or if the The Palace Hotel‘s room service was just exceptional. We had breakfast delivered to our room for only about 6000 yen, and I swear it could probably feed four. Eggs, bacon, sausage, pastries, yogurt, waffles, toast, fruit, salad (common with Japanese breakfast), potatoes, you name it! Look. At. That. Spread.

Tsukiji Fish Market. One of the highlights in my trip was walking around the famous Tsukiji Fish Market. If you don’t want to wake up at 3AM to get in line to see the fish auction, come at 9AM instead. That way, you can still experience the hustle and bustle of the outside market and yes, try the best sushi of your life. The crazy thing is, we didn’t even try for the long lines of Sushi Dai. We entered a random shop Sushizanmai instead and paid less than 2000 yen on a bill for two. I still dream about the fresh, melt-in-your mouth, seaweed-so-crisp goodness. *heart eyes emoji*

Other great additions to the market are the yakitori, fresh fruits, and snack stands–to name a few. I might be overusing the word “best” in this post, but I promise you it comes with meaning. The mochi I had was the BEST mochi I have ever tasted!

Meat in Japan. Droooooool. Let’s not forget how expensive Kobe and Wagyu cuts are in America. Trying out the different meats in Japan always hit the number one spot on my foodgasm list. Heck, experiencing the way Japan does meat probably took the top spot in the whole trip. My favorite was called Kintan–a yakiniku (“grilled meat”) restaurant in Roppongi. We grilled at the table and were offered various choices ranging from short rib to sukiyaki-style to sashimi style (yes, that’s a thing.)

Cucumber with miso sauce and fried gyoza at Gyoza Ro in Harajuku / Dinner with a 45th-floor view of all of Tokyo, kaiseki-style at the Michelin-star restaurant, Hinokizaka, in Roppongi / Udon at a mom-and-pop’s in Dotonbori Alley in Osaka / Breakfast cooked daily by our lovely hosts, Tom and Mitsuki, at this lovely Airbnb in Ikoma, near Nara / Shrimp curry at Wakakusa in Nara / Bakery goods from a local shop in Kyoto / Ramen (with shrimp paste!) at Rokurinsha on Ramen Street inside Tokyo Station

Plan Ahead. Because of the small seating arrangements, reservations might be required, even in a casual restaurant. Also, siestas are quite common, so if you plan on eating somewhere in between lunch and dinner, make sure they’re not closed!

The Hunt for Food. You’ll notice most of my links are Yelp-based, but Yelp in Japan isn’t as prevalent as here in LA. Most of the time I would use Google Maps or just wander around. The best food in Japan was either recommended by a local or found on accident.

Japanese Menus. Some of the best restaurants don’t have English menus. That’s where Google Translate comes in handy. You can use the app to take a photo of the text in kanji or similar, and it will translate to English.

Placement, Placement, Placement. What’s that box under your chair or that hook on the wall? Most places have a storage spot for your purse, backpack, or briefcase. Why is the server giving you a wet towel before the meal? Let the warmth cleanse your hands and even face before consumption. Also, never stick your chopsticks upright. Instead, place your chopsticks horizontally across your plate as a sign that you’re finished.

Cash, No Tip. Bring cash because credit card is hardly used in Japan. Also, tipping is uncommon and sometimes even frowned upon. A simple “oishii!” (delicious!) or “gochisosama deshita” (thank you for this meal) will suffice along with good manners.

Japan has really nailed the whole eating game down to a science. I’ve come to the conclusion that almost all the restaurants I’ve come across (both accidentally and on purpose) are high quality because the Japanese people take pride and passion in their work.

I LOVE getting to experience new cultures, and I think food is a dominant part of each one. If you have ever been blown away by any culturally foodtastic experiences, please share below!